What you need to know about of bankruptcy processes in Malaysia. Being made a bankrupt is a major hassle and interruption to your life. Educate yourself about it and you will appreciate the importance being on top of your finances at all times. 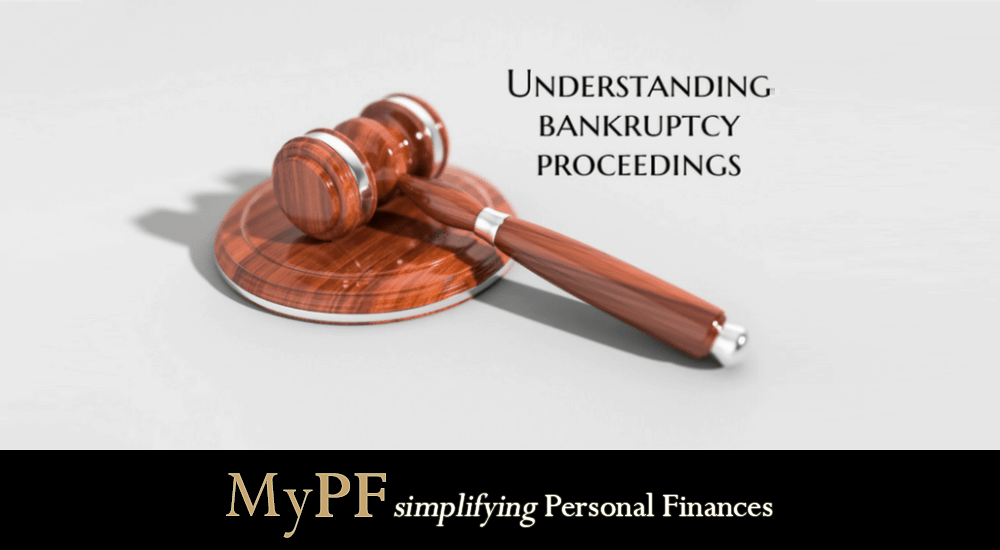 Generally, the incident of bankruptcy happening to us never crosses our mind. If questioned what bankruptcy means, few things came to mind.  A bankrupt is a loser in managing finances. A person who is homeless and someone who’s never ashamed to borrow money.

Being taken for a bankruptcy action can happen to anyone of us if you have debts. A sudden loss of employment or loss of the only source of income will put you in financial distress.  As you’re unable to make debt repayment, you will face legal action. A financially literate person will make sure all his/her debts serviced and repaid. They know the inconveniences and hassles of being bankrupt.

This article spells out the bankruptcy processes in Malaysia.

Bankruptcy Act 1967 and alongside the Bankruptcy (Amendment) Act 2017 made up the bankruptcy law in Malaysia. A bankrupt is the legal status of a person or organization who is unable to pay the debts owed to creditors.  The court of law makes such declaration.

If you are unable to pay your debt, you are insolvent but not a bankrupt yet. It’s best you negotiate a deal with your creditors while insolvent. You may propose an instalment plan to settle the debt.

2. What if You are Declared Bankrupt?

Your spending power will be severely restricted. Your financial position is controlled, assets handed over and limitations of rights and holding of certain positions:

You need to declare assets own by you. These assets will be under the strict supervision of the Director General of Insolvency (DGI). The DGI will sell them and the income distributed among the creditors. However, certain assets cannot be sold i.e.

Part of your monthly earnings can be used to pay your debt.

For housing loan, if you default on payment, the bank (a secured creditor) can foreclose the house to be auction off without taking the bankruptcy proceeding.

Its obvious nobody would want to be declared a bankrupt. It will create negative tension for a couple. The additional stress and the stigma of being labelled a bankrupt may just be the final push that causes the collapse of your marital relationship.

Nevertheless, in certain circumstances such as failure in a heavily-invested venture, bankruptcy is the best way to a start afresh and move forward. 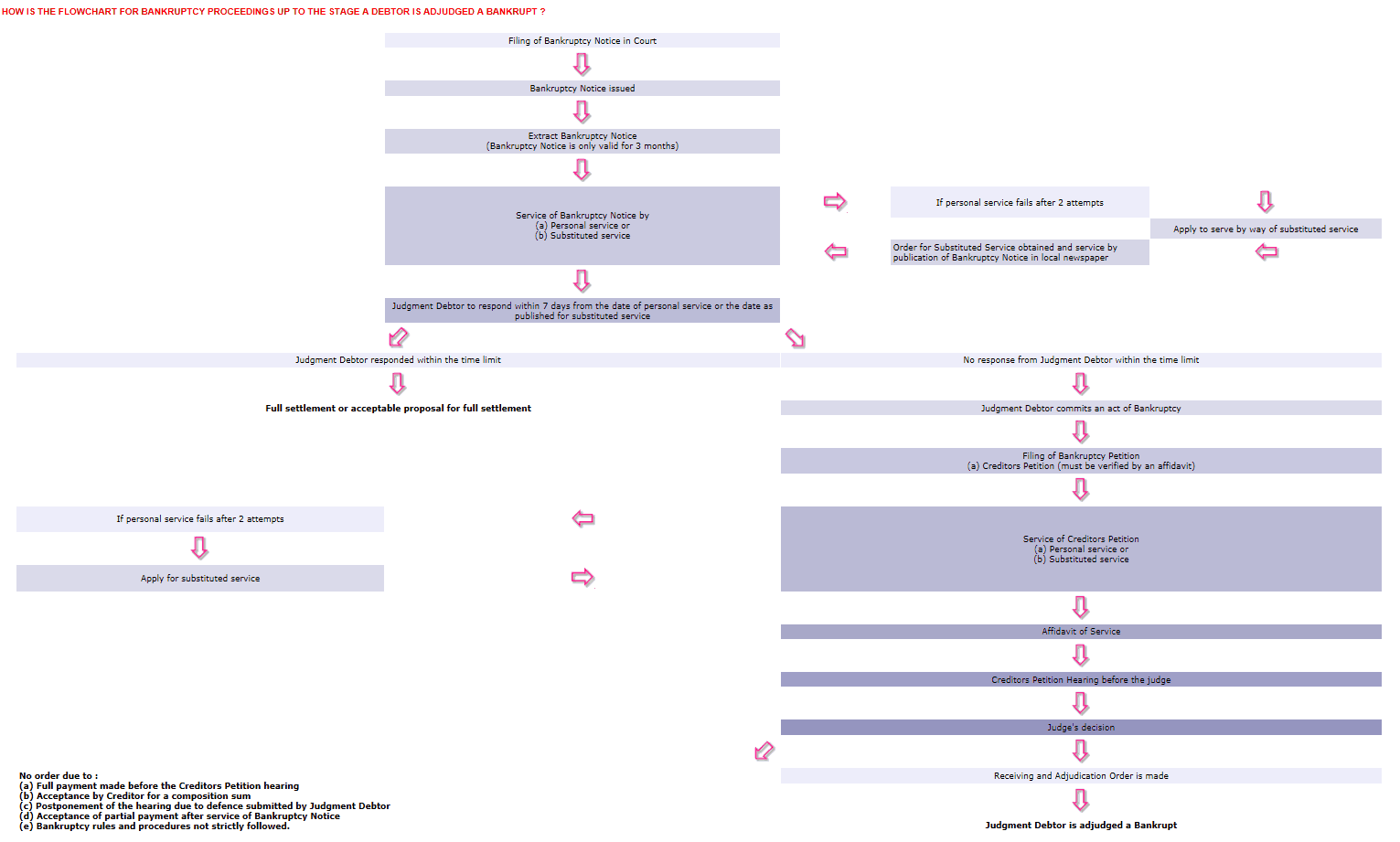 Bankruptcy action can be brought against you if you have carried out an act of bankruptcy, the common one is a failure to reply to a judgment debt or bankruptcy notice.

Once you are declared a bankrupt, you need to declare all your assets. Your assets will then be distributed among your creditors. Your creditors need to file proof of debts to the court for a claim of the assets.

A bankruptcy proceeding can also be brought against a minor (below 18 years old) with no maximum age limit.

You may not realize you are bankrupt. How is this possible when there are various processes needed to be declared bankrupt?!

It can happen if you move a lot and did not inform your creditors. Bankruptcy notice must be served by hand personally and if you cannot be found by publication in the newspaper (substituted service) or send to last known address.

If you’ve been a guarantor for somebody or you want to discover about your bankruptcy standing, you can use a service like MyEG to verify which costs RM12 per identity per bankruptcy search. You can also request your credit score report from Malaysia’s Credit Bureau or CCRIS. 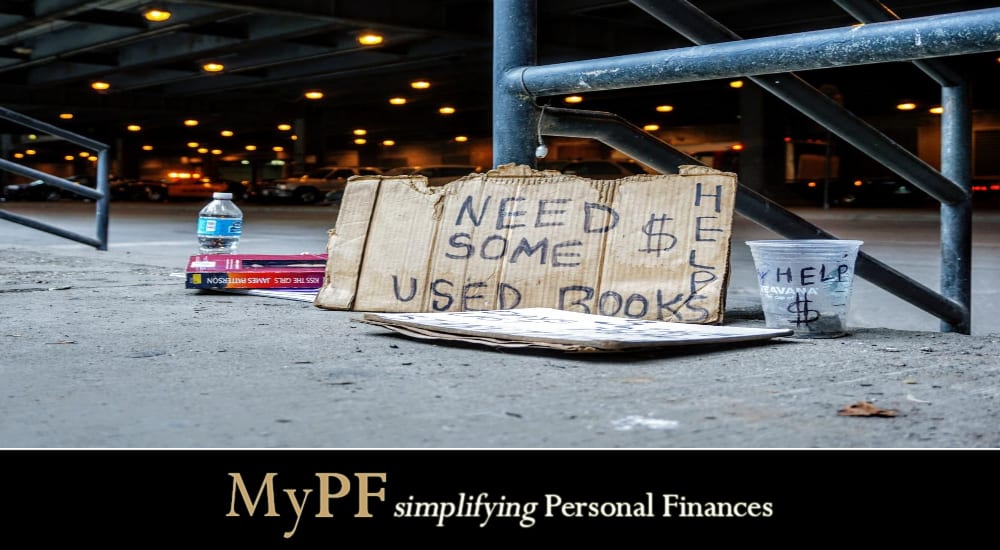 You either pay-off your debts or wait 3 years for an automatic discharge from bankruptcy. Once discharged, you will also be released from your unpaid balance debt. However, this excludes debts owed to the government or anything obtained through illegal activity.

There are two different ways of becoming “unbankrupt”

You can immediately apply for passport and bank accounts again.

The best way is to start and commit to a household financial budget living within your means and incorporating good personal finance principles including:-

Below are other tips to avoid going bankrupt:-

Malaysia’s bankruptcy laws receive an update in March 2017. Here are the key updates.

Q: Can a Malaysian overseas be declared bankrupt?

A: Yes. For example a Malaysian acting as a guarantor may be declared bankrupt upon judgment if trying to run away. The person may have issues when trying to renew his/her passport.

Share advice on getting out of bankruptcy and how to avoid bankruptcy.

About the Author: Eric Kiang

Eric is a qualified chartered accountant since 1992 and a member of Malaysian Institute of Accountants (MIA). He received his Diploma in Financial Accounting from TAR College and subsequently professional accountancy from ACCA. He has 25 years working experience in different finance-related jobs. He is now a consultant, and personal finance and business writer. His main goal is to help and educate non-finance professionals to understand and solve their personal finances problems. He believes everyone should be financially literate because everything we do has money implications! Eric currently resides in Kuala Lumpur, Malaysia with his wife and two young children.